Zimbovibes.com Features Uncategorized Tonight is the night!..Who will take the Nama?
0 0

Tonight is the night!..Who will take the Nama?

TONIGHT Zimbabweans will be anxious to know who will come out tops during the country’s premium arts event, the National Art Merit Awards (Nama) to be held in Harare.

The Nama will be broadcast live on ZBCtv as from 7PM with the who’s who of the country’s arts industry congregating at the Harare International Conference Centre.

This year the Nama nominees list is quite refreshing as it mostly has new kids on the block.

Fast-rising songbird, Tamy Moyo, gospel musician Janet Manyowa as well as Zimdancehall artistes, Enzo Ishall and Jah Signal who undisputedly changed the game last year with their music, managed to outshine the likes of Jah Prayzah and Winky D by filling slots in which these two are usually nominated in — (Outstanding Song, Outstanding Album and Outstanding Musician categories).

However, people should remember the Nama organisers have said in the past that the awards were not a popularity contest. This means even if the art work is popular, this does not mean that it is outstanding.

With this in mind, the competition is stiff and below are our predictions in five categories on who will win. By virtue of being the most viewed music video on YouTube with a whopping three million views; Jah Prayzah’s Dzamutsana by Vusa Blaqs could win the prize. This music video’s aesthetics have caught people’s eyes and impressed many. Set in a village in Binga, the Dzamutsana video is easy on the eye and something fresh in the music industry. Perhaps the only rival in terms of being outstanding might be MuGarden by Winky D featuring Gemma Griffiths. People should not forget that there is Tamy Moyo’s music video, Tekere, by Andy Cutta.

It seems by the look of things it will be a tight race between Tamy Moyo and gospel musician Janet Manyowa. The two artistes last year worked very hard to make their mark in the industry. For Manyowa, her album launch at Celebration Centre in Harare was a success as it was sold out. Her album was welcomed with open arms by many fans.

Perhaps with that slight edge she might win the award. 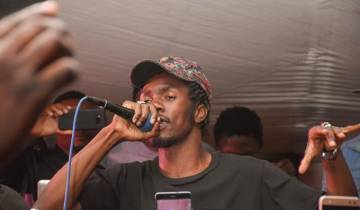 Apart from Jah Signal who is not on this list, Enzo Ishall was the man of the moment last year. His two hit tracks Kanjiva and Smart Rinotangira Kutsoka made him a cult hero among Zimdancehall fans. However, ExQ or Mr Putiti as he is known these days, has an album with hit songs such as Nzenza and Let’s Talk About It. He has moved around the country performing at various venues and each time has been received well.

ExQ might take it ever so faintly ahead of Enzo. But people should not forget Baba Harare.

This is a difficult category to judge as everyone here has a chance of winning the award. Gospel music lovers will say Janet Manyowa’s Grateful is the best album on this list. You turn to Afro jazz lovers and they will say Jeys Marabini out did himself on Ntunjambila. The album was also received well when it was launched last year. For the young at heart ExQ’s Tseu Tseu has everything to be outstanding. Sungura music hardliners love Alick Macheso’s Dzinosvika Kure, an album they described as epitomising the resurrection of the sungura genre. However, as these awards aren’t popularity contests, maybe Jeys Marabini’s Ntunjambilawill nick it this year.

Whatever happens here, Sweetie (Shinga Muroora) is the Outstanding song because of its popularity and sense of euphoria itbrings to people. There was no social gathering in Zimbabwe where Sweetie wasn’t played or requested. Kanjiva by Enzo Ishall is also a strong contender, but Sweetie takes the cup.

tinashe says:
this site site is the best can i have its gmail